What is Augmented Reality?

The Augmented Reality is an improved version reality, which uses images generated by a computer to superimpose them over a user’s view of real world elements and physical things.

The word augmented comes from augment, which means to increase or improve something. When we talk about Augmented Reality, we are talking about sounds, graphics and touch elements are added to the real world to improve our perception of reality.

What types of augmented reality exist?

As its own name says, this type of Augmented Reality uses markers that have to be recognised to show elements such as a 3D version of an object or picture or more information about any object. 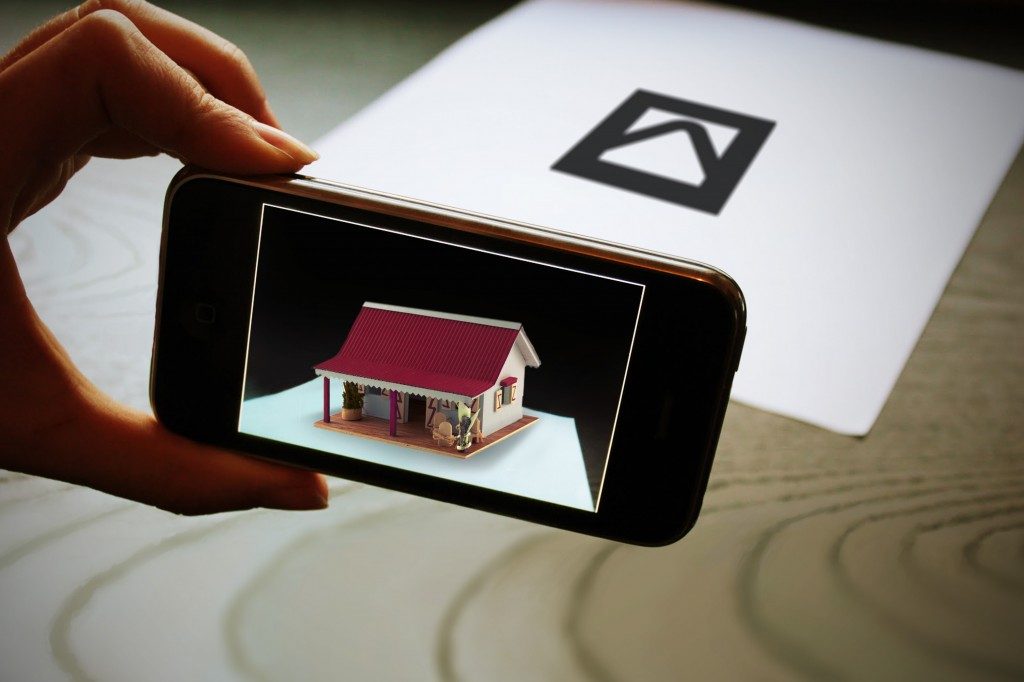 Recognition Based Augmented Reality is one of the most used currently, because basicly, the only thing you need is a smartphone to make it work.

The Superimposition Based Augmented Reality replaces, fully or partially, the real vision of an object to show you an ‘augmented’ version of it. In this type of Augmented Reality, one of the most important thing is detection. 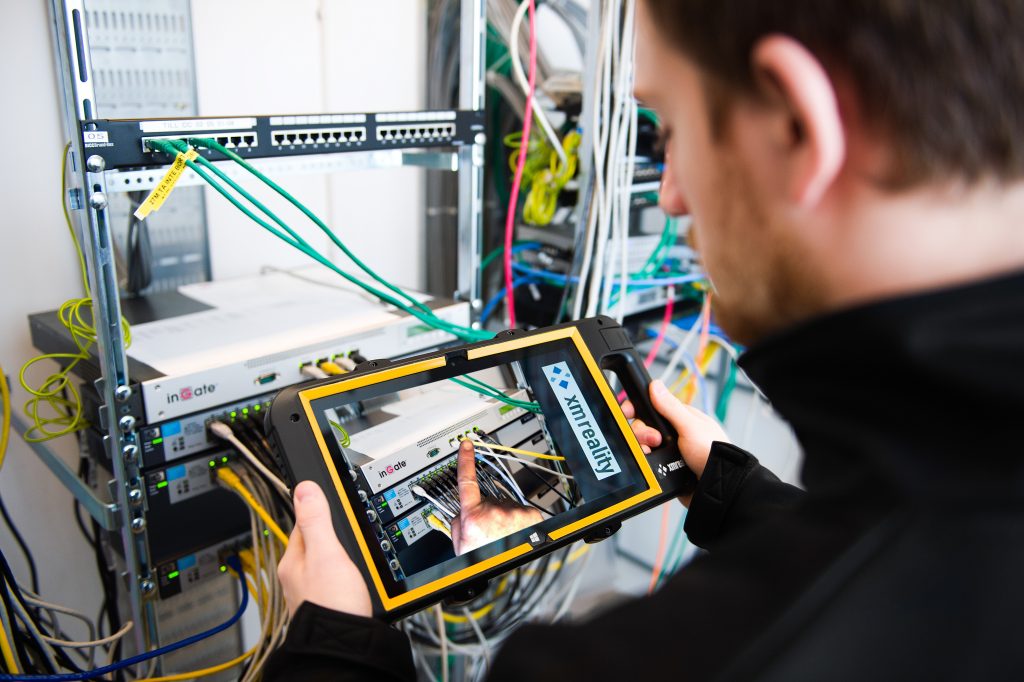 It would be impossible for an app to show you an ‘augmented’ version of any object if it can’t determine which object it is. Superimposition Based Augmented Reality is a variation of Recognition Based, but instead of using an specific marker, it uses real objects.

Augmented Reality Based in Location

This would be the opposite of recognition based. Lotation Based Augment Reality show you thing depending on the physical place you are in that moment, without having to use any mark, only your surroundings.

To make it work, it uses components of an average smartphone: accelerometer, digital compass and of course, GPS. These are the elements responsible of knowing your location.

This kind of Augmented Reality projects an image on physhical real world elements and spaces. Projection based Augmented Reality may be the most attractive one, as it’s possible to make this projections interactive, such as an projected keyboard on a desk. 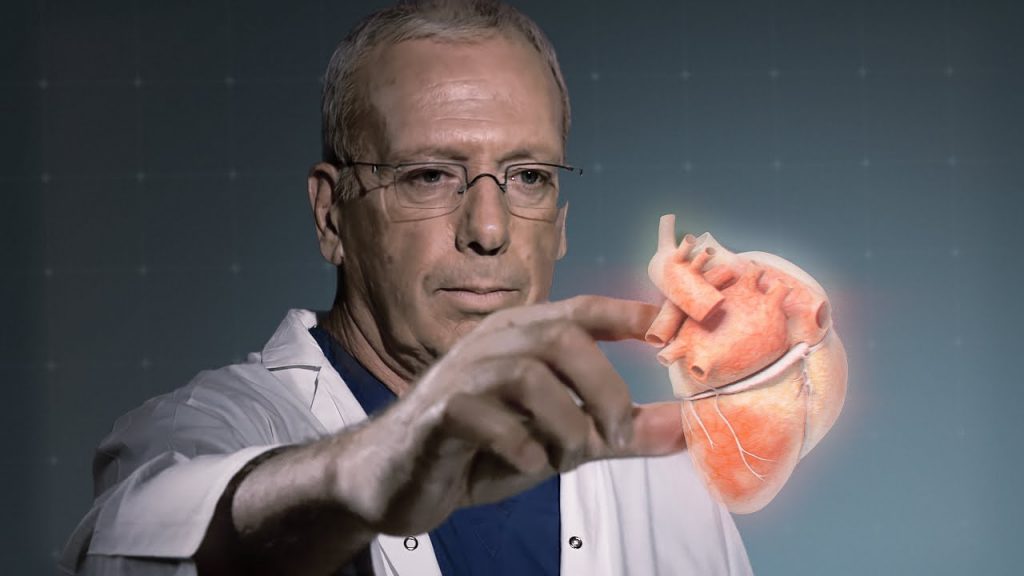 Of course, it can be also non-interactive. For example, to see how and objetc fit in its future place and choose its possible position and orientation. Another example would be holograms.

Augmented Reality is the future, but it is already improving our lives. The possibilites for it ard endless, and everyday new applications are created to solve problems in any field or sector with this new technologies.

AR applications in real-life vechicles come from gaming. In racing games, you are able to see the speed, distance from any other vehicles, maps, indications and many other things, right in your range of view, a nice thing to have in real life.

Althought it doesn’t exist yet, there are AR developers working on it so we can use it in the future. The concept would be to use the windscreen instead of the screens that already exist on a vehicle. 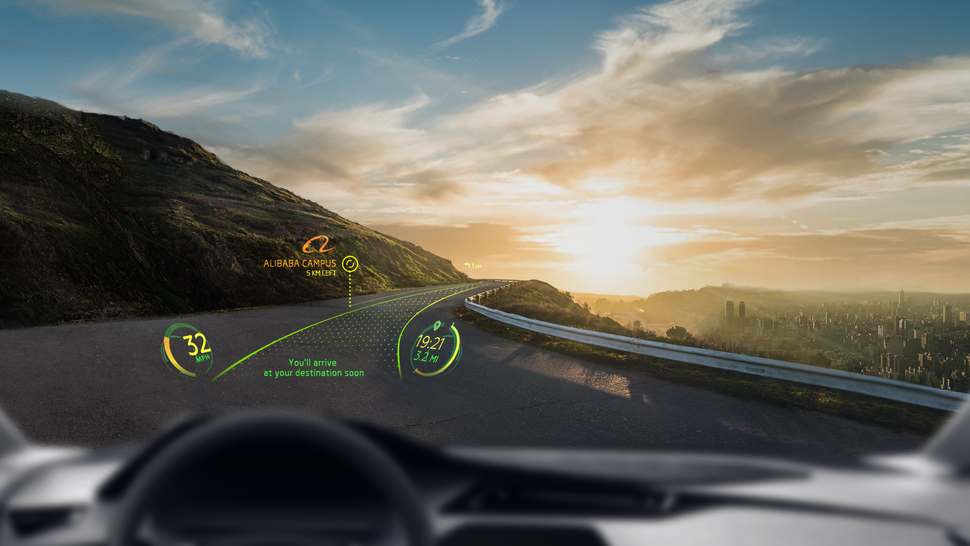 The first thing would be to give you simple indications such as speed or fuel level. Don’t having to look down to your screen, it improves safety on the road. AR will also improve the already existing navigation apps, as it will show you the exact way you have to go, right in front of you.

As in driving, AR principal benefit for medical sciense would be to give doctors more information without any more distractions. A possible use would be to combine it with x-rays. The doctors, with some goggles, will be able to see x-ray images previously taken, superimposed in the patien’s body.

Another use is for medicine students. AR will allow them to see internal parts of a body such as bones, muscles or organs, superimposed in real-life bodies. With this, they will be able to learn better and faster, resulting in more prepared doctors.

Consuming and sales are the main engine of the world we live in. That’s the reason why every developer try to adapt new technologies to it. AR wouldn’t be less.

eCommerce is growing by the day. We buy almost anything online, but people often doubt if the product will be the exact same one as the picture, a lot more when buying clothes. With AR, that all will be gone. The technology will make possible to have ‘virtual rooms’ where we can try on from shirts to shoes before buying it. 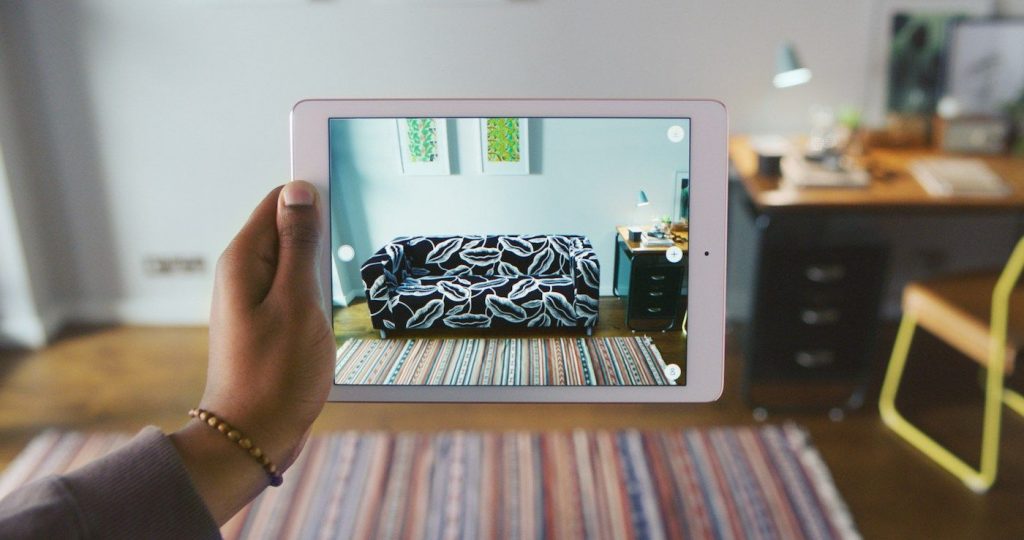 Those are ‘wearables’ examples, but AR can be applied to every kind of eCommerce. For example, you could see how a furniture would fit in your room or even how the entire room would look like with another color of walls.

Tourism is one of the industries that can be most benefited from AR. When we are travelling, we always look for more information, and AR is perfect for that. An amazing idea would be an AR guidance app. This would be similar to the one in vehicles, showing you exactly where you have to go, while you point with your camera to what you are seeing. 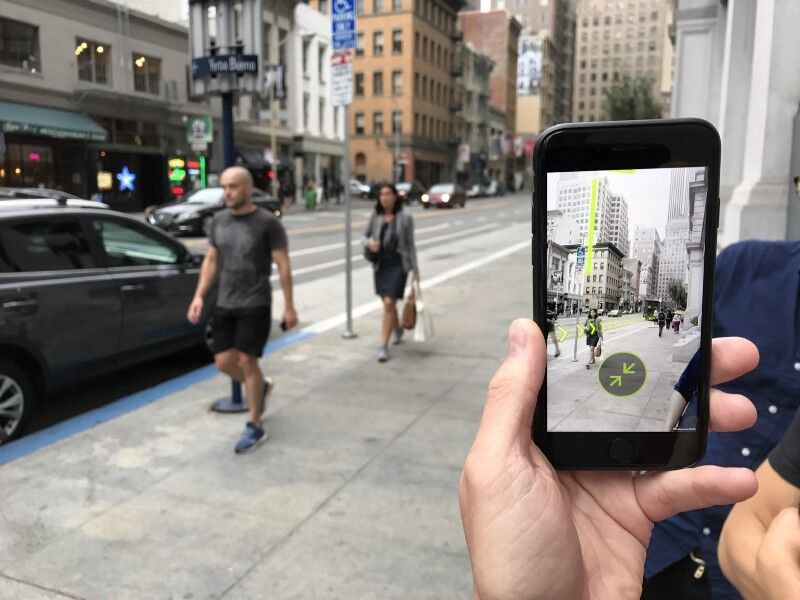 This app would give us information of important buildings or places as we are passing by them, and that we would have maybe missed. The experience of tourism would be multiplied with this kind of app.

The problem right now to this is the current state of technology. AR depends of GPS, compass and gyro-sensor, that need a lot of improvement. These three are very accurate, but not exactly. For example, if GPS have and error of 10 or 15 meters, acceptable in other situations, the AR app can show things you wrong things, making it useless.

However, there are tourism AR applications that are possible right now. It would be the one for specific places and locations, both exteriors and interiors. For example, imaging pointing at a building, and see old images superimpossed so you see how things were in other times. 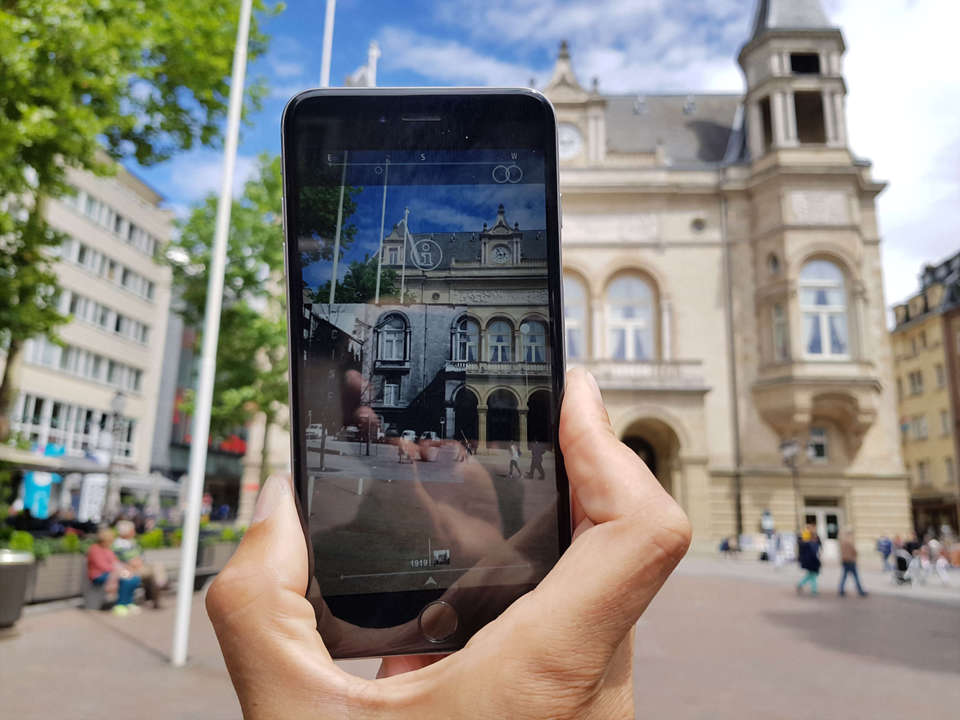 Also, imaging yourself visiting a museum and staring at a old sword. With the specific AR app, you could have the King itself using the sword against his enemies right in front of you, just pointing at the object. Wouldn’t that be amazing?

AR in tourism goes beyond maps and interesting locations. When you are travelling to another country, you need to communicate with locals, often in another language. If you don’t know that language, AR can help you. 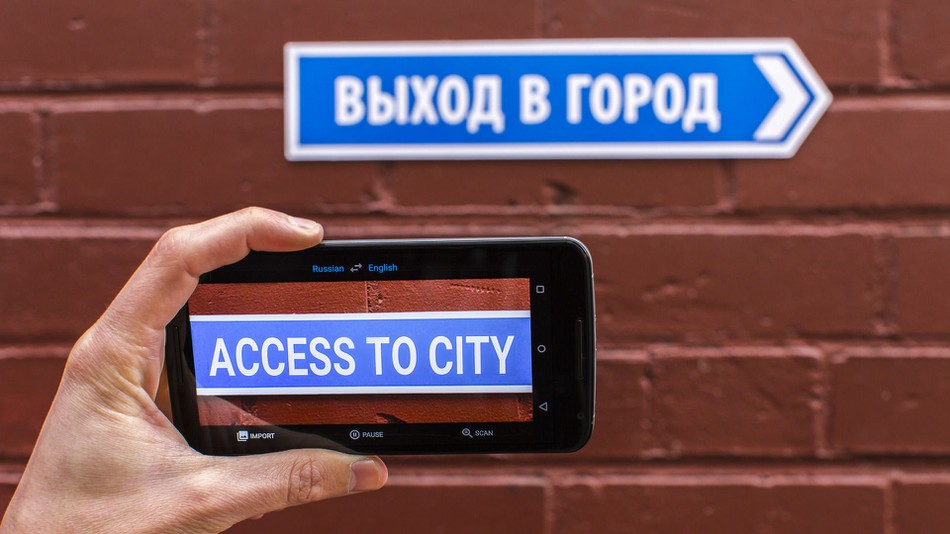 There are already translating apps, but it’s tedious to translate every single thing you don’t understand. With an AR app, it is possible to have a text translated in your screen just by pointing at it with your camera.

Of course, something as amazing as AR can be applied to sports and entertaiment. There are 3 principal ways to do so, and they all exists today. Those would be: refeering, tv-retransmission and advertising.

For refeering, one of the first sports to use it was cricket, the most important currently may be tennis, and the world most important sport, football (soccer), is starting to do so. We talk about the Hawk-eye technology.

In tennis, and cricket, it gives the refeer the chance to see thing that are impossible for the human eye. When a ball is called out or in and a player doesn’t agree, he or shee calls for the hawk-eye, which can tell exactly where the ball has touched the ground, milimeters accurate. The technology for football is similar, as it tells the refeere if the ball has passed the line to be goal.

When advertising, companies display ads in strategic position of the field so they can blend witth real world elements thanks to AR. But the most used right now, and perhaps the most interesting for spectators, is AR in tv-retransmissions.

Its being more and more used in football, showing you the names of players as they move in the field, so you know who is who. But is swimming the sports that use it better. As simple as showing a line, but not any line. 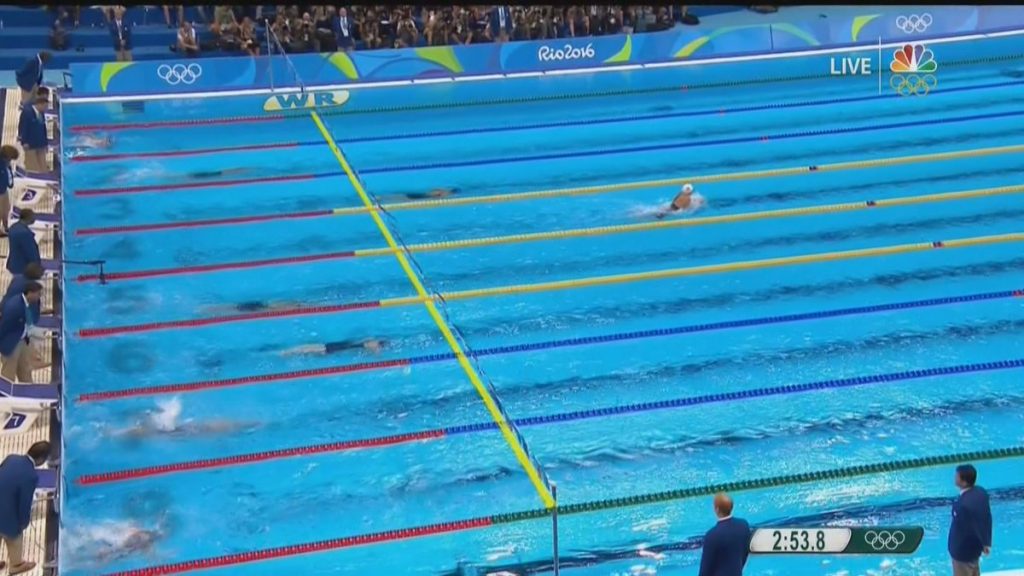 This line marks the World Record time, and it allows spectators to see if the swimmer, besides of winning, is breaking the record or not, giving it more emotion. With AR, they also highlights the winner and other positions.

One of the most exiting AR applications is for Education, as it applies to a lot of subjects. Books would be less useful, as it would be possible to teach ‘E for Elephant’ or ‘T for Tree’ projecting real-looking elephants and trees. 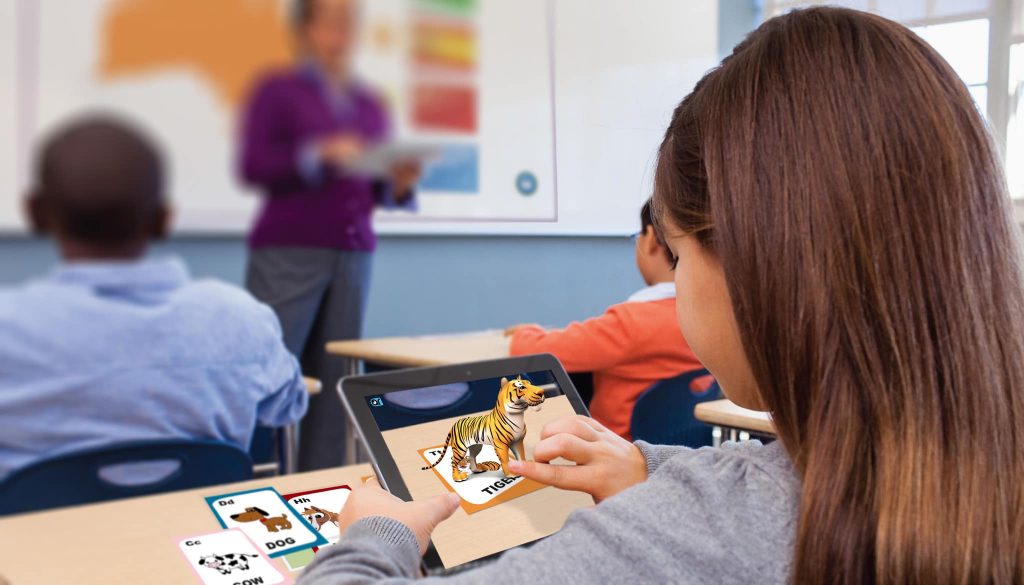 It also could be used to show math concepts, chemical reactions or physical phenomena. Children will learn quicker and better if they can actually see the reaction when atoms and molecules interact with each other when they are brought closer. This is just an example of multiples situations.

AR in Architecture has two main possibilites. One is simple to imagine. It would be to convert 2D paintings into 3D structures, without the need to actually build it. It would considerably reduce costs to projects. 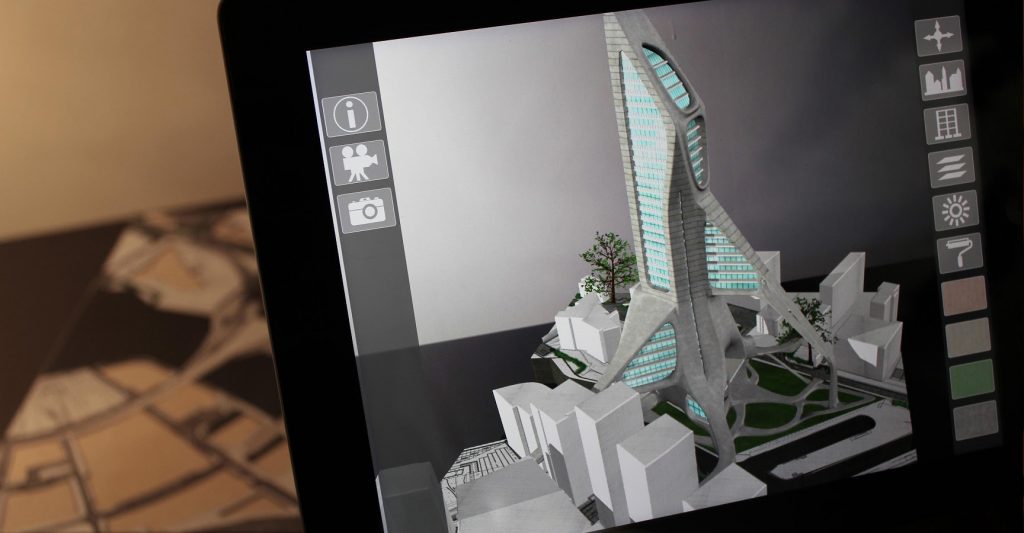 The other option is for reforms projects. In this case, you would point at the current building and see how the change will look before doing it so. It helps to see possible fails or improvements to the initial idea.

The AR applications for Military are very ‘simple’, they all come from FPS (First Person Shooter) games, where, just hovering the mouse over things, you can see a building name, teammates or weapons. In the real world it would be similar.

The future for military is promissing. Using AR and aided with tactical gear carried by soldiers themselves, they can see thing they wouldn’t. For example: enemy movements, range of enemy weapong or tracking several enemies silmutaneously. They all would be indispensable.